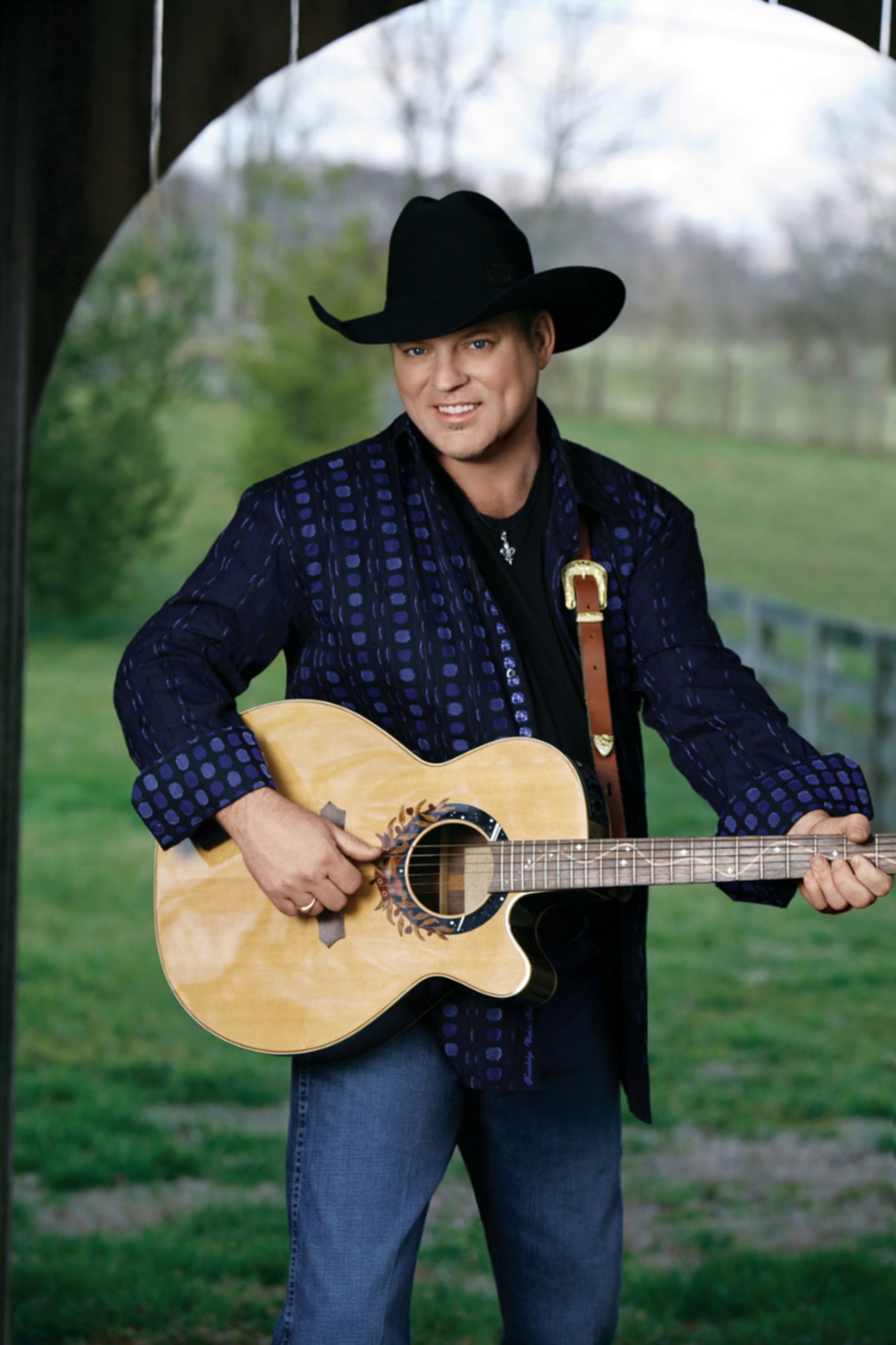 John Michael Montgomery has turned an uncanny ability to relate to fans into one of country music's most storied careers. Behind the string of hit records, the roomful of awards and the critical and fan accolades that have defined his phenomenal success lies a connection that goes beyond his undeniable talent and his proven knack for picking hits. Since the days when "Life's A Dance" turned him from an unknown artist into a national star, John Michael’s rich baritone has carried that most important of assets--believability. Few artists in any genre sing with more heart than this handsome Kentucky-born artist.

It is readily apparent in love songs that have helped set the standard for a generation. Songs like “I Swear,” “I Love the Way You Love Me” and “I Can Love You Like That” still resonate across the landscape--pop icon and country newcomer Jessica Simpson cited “I Love The Way You Love Me” as an influence in a recent interview. It is apparent in the 2004 hit “Letters From Home,” one of the most moving tributes to the connection between soldiers and their families ever recorded, and in “The Little Girl,” a tale of redemption that plumbs both the harrowing and the uplifting. It is apparent even in the pure fun that has always found its way into John Michael's repertoire--songs like “Be My Baby Tonight” and “Sold (The Grundy County Auction Incident),” where John Mi- chael's vocal earnestness takes musical whimsy to another level.

Now, with the release of Time Flies, which he co-produced with Byron Gallimore, John Michael takes another big step forward, strengthening his position as one of the most versatile and compel- ling vocalists on the country scene. With songs like "Forever" and "If You Ever Went Away," he proves he is still the master of the power ballad, a man capable of bringing honest emotion to life in song. He brings his ever-present sense of humor to bear on "With My Shirt On" and "Mad Cowboy Disease," songs with wickedly skewed sensibilities. With songs like "Drunkard's Prayer" and "All In A Day" he explores two dramatic facets of human existence, and with "Brothers Till The End," John Michael celebrates the family background that led both him and his brother Eddie, of Montgomery Gentry, from a small-time fam- ily band to the top of the charts.

The emotional centerpiece for John Michael is "All In A Day," the song that con- tains the lyric that gave the album its name. “That song talks about how time flies,” he says, “and I got to thinking that it seems like yesterday that 'Life's A Dance' was out and people were asking me, 'Where would you like to be in 10 or 15 years?' 'Still here!' was my answer and, thankfully, I am still here. Longevity was more important to me than anything else, and to still be able to do something I love so much is wonderful. Still, it's gone by so quickly that I thought, 'I'm going to build an album around that.' That's where the shape of this album comes from.” Each song, he says, reminds him of an era in his life and an artist or style of music. "What Did I Do" is reminiscent of "the gritty Hank Jr. stuff we played in our honky- tonk days," while "Loving And Letting Go" "reminds me a bit of Lionel Ritchie and the Eagles, artists that helped mold me into the artist I am today."

Beyond that, he maintains, he selected material the way he always has. "When I go after songs," he says, "it's almost like we're looking for each other. It's like digging for rocks until now and then I find the shape I'm looking for, and one by one I see how they fit together and where it's all going."

It is never, he adds, a matter of second-guessing his fans. "I always told myself that if I ever figured out what made the fans tick and what it was about me that they liked, I'd bottle it up and I'd own the most successful record label in the world."

The irony surrounding that tongue-in-cheek assessment is that John Michael has indeed founded his own label--Stringtown Records, named for a hamlet near his Kentucky home. He is one of a handful of long-established stars able to take the next step and become label executives as well as artists. John Michael launched Stringtown after parting company with his last label, at a time when major and larger independent record companies in Nashville were retrenching and consolidating.

"I didn't know where those labels were going," he says with a grin, "but I knew where I wanted to go. I felt like it was time to branch out on my own. I had learned the executive side of this business enough to start my own label, and I knew that there were going to be a lot of great executives looking for work as the labels downsized."

Now that he has launched Time Flies, he is looking to expand Stringtown's reach. "I'll continue making records for myself," he says, "but I'd also love to find other artists to produce, hoping I can open some doors and make some dreams come true like mine did. I love finding hit records and producing them, and I see that down the road for myself." It is a vision whose origins lie in deceptively modest beginnings. John Michael Montgomery was born in Danville, Kentucky, to parents who imparted a lifelong love of music. "Where most people have chairs and sofas in their living rooms," laughs John Michael, "we had amplifiers and drum kits."

The family band played on weekends throughout the area, and John Michael and his brother Eddie eagerly soaked up everything about it. "To a certain extent," he says, "my dad always had a natural ability to draw fans and entertain people; I don't care if it was on the front porch, the living room, or on a stage. I think that transitioned to me and my brother being able to do that on stage."

John Michael took over lead singing chores after his parents divorced, and he performed for a while in a band called Early Tymz with Eddie and their friend Troy Gentry. Nashville talent scouts began hearing about and then seeing John Michael perform and by the early '90s he had a record deal. The hits followed steadily, with songs like "Rope The Moon," "If You've Got Love," "No Man's Land," "Cowboy Love," "As Long As I Live," "Friends" and "How Was I To Know" establishing him as one of the elite acts of the era. He received the CMA Horizon award and was named the ACM's Top New Vocalist, setting off a long series of awards that included the CMA's Single and Song of the Year, Billboard's Top Country Artist, and a Grammy nomination. Heavy touring meant he kept the close touch with fans he had begun in the clubs back home.

"You get to know your fans and what they like more and more through the years," he says, "and you kind of gravitate towards one another."

Indeed, he has always had an extraordinarily close relationship with his fans, and they have stayed with him through good and bad times. Just before launching Time Flies, John Michael let them know that he was entering treatment to deal with an addiction that was an outgrowth of anxiety and insomnia

"Luckily, I woke up one day and said, 'I've had enough. I need some help with this thing.' The hard- est thing for most people to do is ask for help. I had felt claustrophobic on the bus to the point where I didn't want to get on it, and now I enjoy getting on the bus a lot more." That, of course, is great news for both John Michael and his fans, and he is back out continuing the legacy of performance that has kept him going since he was a boy.

"We were weekend players at the beginning, and then it turned into five nights a week," he says. "Then we got record deals, and we were still 'weekend superstars,' only now it was on much bigger stages." Asked what he thinks gave him the edge in a career that calls millions but gives stardom to just a few, he pauses, then thinks back to the legacy of his parents. "I reckon it was good genes and good blood," he says with a smile. Few who know the depth and breadth of his own growing legacy would disagree. 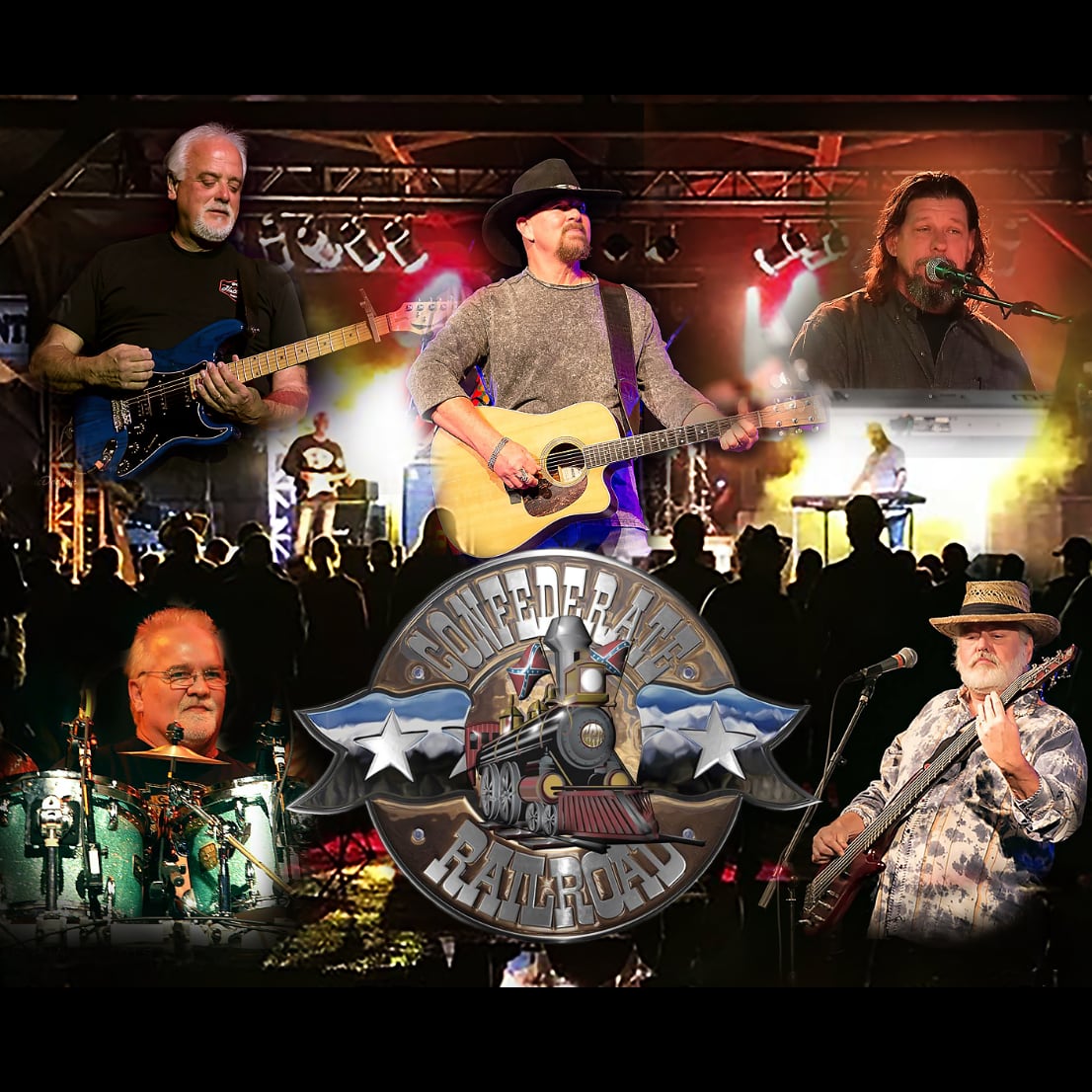 Confederate Railroad first rolled onto the national country music scene in the early 90s with its unique style and sound.

Headed by founder and frontman Danny Shirley, the former backup band for both David Allan Coe and Johnny Paycheck got their big break by signing with Atlantic Records. The first single from their debut album ("Confederate Railroad") was "She Took It Like A Man". It went to No. 26, a preview of what was to come. "The next two singles, "Jesus and Mama" and "Queen of Memphis" went to the top of the charts. Three more huge hits followed, "Trashy Women", "When You Leave That Way You Can Never Go Back", and "She Never Cried". "Trashy" would lead to a Grammy nomination and become their signature song. That album with six hits and nearly three million sales brought Confederate the Academy of Country Music's Best New Group Award in 1993 as well as numerous nominations from the Country Music Association and the British Country Music Foundation.

The second album, "Notorious", produced one of the group's most popular songs "Daddy Never Was the Cadillac Kind" which became a No. One video as well. "Elvis and Andy" and "Summer in Dixie" would further establish the Railroad as one of the most versatile acts in the business. This album would sell more than one million. Their overal totals are 18 charted hits and five million albums sold.

From rowdy country to raw emotion, a Confederate Railroad concert today covers a wide range of feelings. Young people will be there rocking to "Trashy Women", while their parents and even grandparents will likely be singing along to "Jesus and Mama". The band plays 100 or so dates each year. Whatever the venue, they are right at home...be it a fair, a club, or a biker show. Shirley, the lead singer and vocalist, and his mates, Mark Dufresne on drums, Mo Thaxton on bass and vocals, Rusty Hendrix on lead guitar and Joey Recker on keyboards and vocals are obviously having fun right along with their appreciative audience. At the end of each show, the band stays around until every fan who wants an autograph, or to pose with the group for a picture or just say "hello" is taken care of.